SHIPINFO created a global digital map of the movements of vessels delivering supplies within scope of a grain deal from three ports of Ukraine: Odesa, Chornomorsk and Yuzhny. 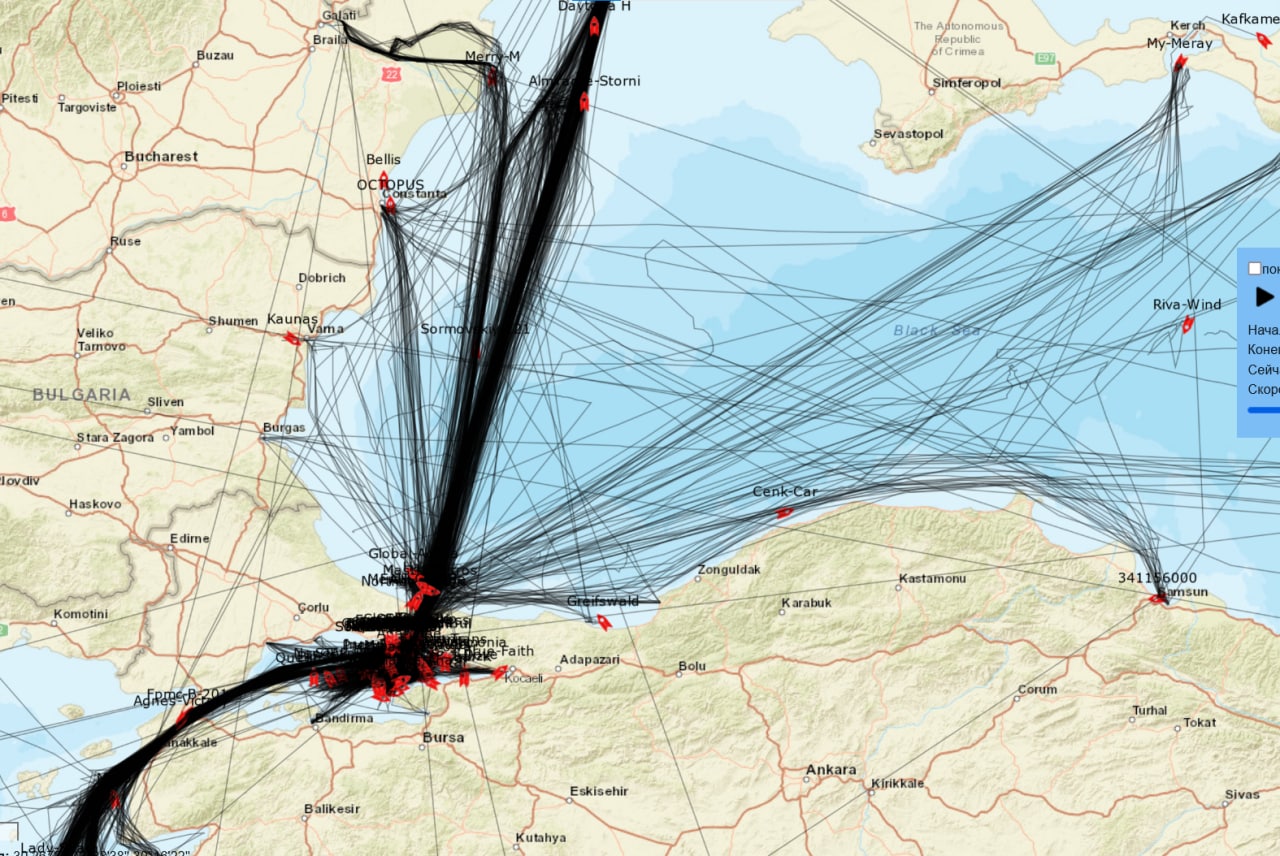 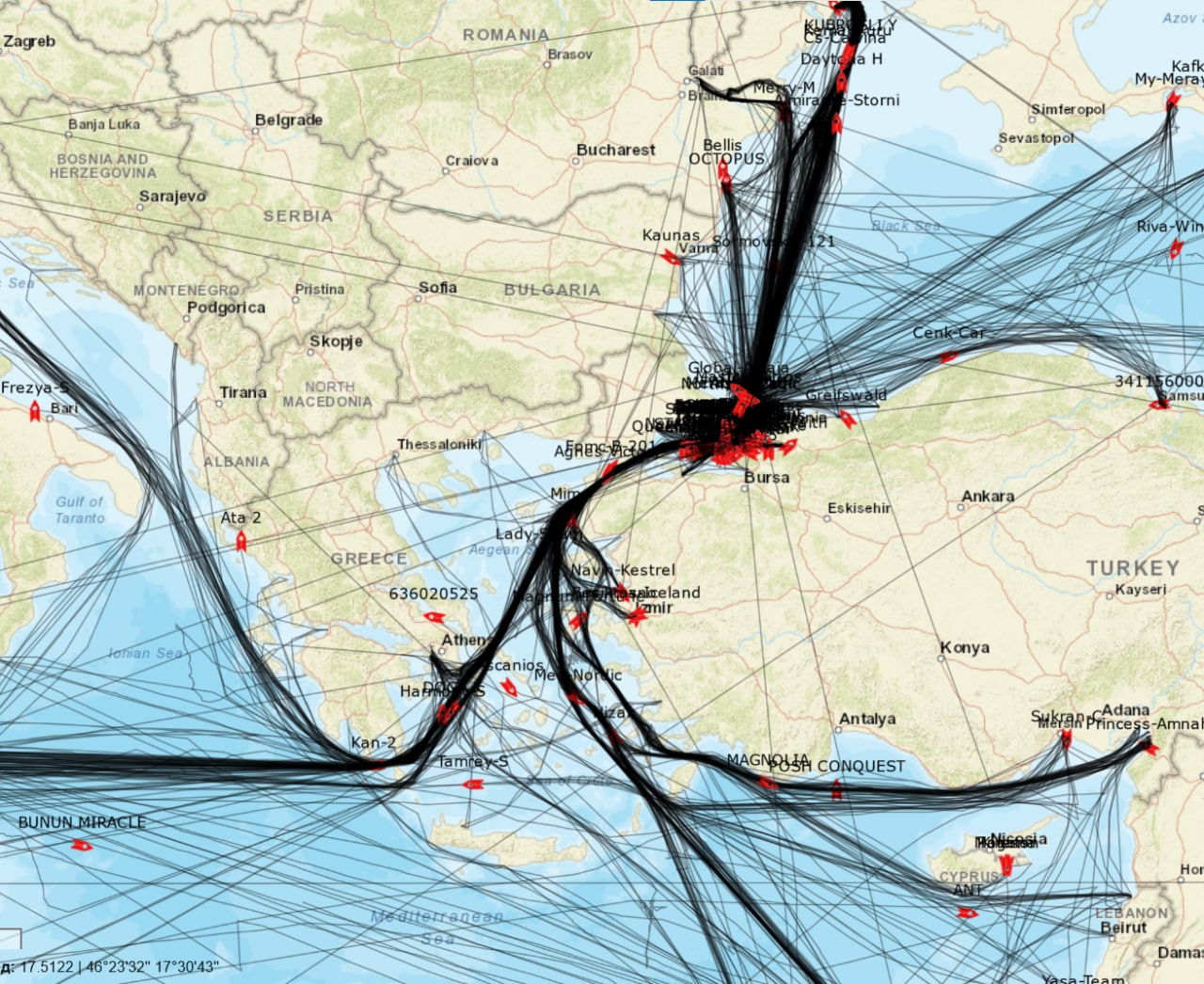 With the help of the GORADAR service, an animation of the movement of these vessels was created, starting from August 1, 2022 (the day when the first vessel named RAZONI left the port of Odesa), ending on October 25, 2022 (the moment when the map has been published).

The map is constantly updated with new data and up-to-date information as new vessels appear in the list of the Black Sea Grain Initiative. Animated maps will accordingly be re-released after certain periods of time, and updated.

The map itself is located at the following link

You can enable the vessels movement animation by the link

To enable animation, you have to use a special console that appears on the right side of the map. You have to select the desired scale, direct the map to the desired area and turn on the "Start" (Play) button on the console. The progress of the transaction on the map can be scrolled by rewinding, paused, and other manipulations can be performed. 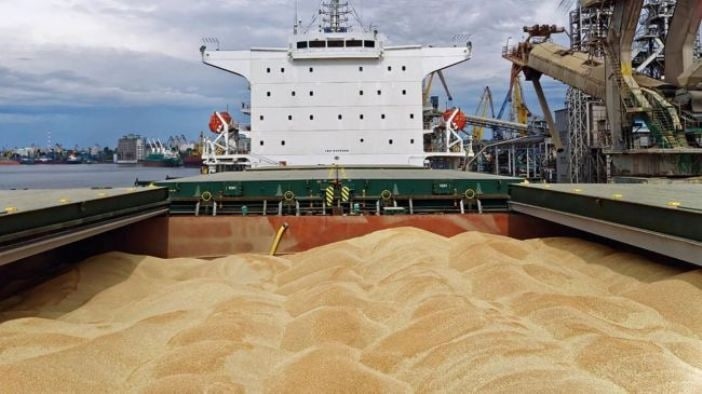 The Russian-Ukrainian armed conflict that began in 2022 greatly aggravated the food crisis in the world, since, according to the UN Food and Agriculture Organization (FAO), Ukraine is one of the world's leading grain exporters, supplying the market with about 45 million tons of grain per year.

The parties to the conflict, mediated by Turkey and UN representatives, discussed for a long time the possibility of the safe export of goods from Ukrainian ports. As a result, on July 22, an agreement was signed in Istanbul, and on July 27, a Joint Coordinating Center for the Black Sea Grain Initiative was established under the auspices of the UN.

On August 1, the first vessel with corn called RAZONI left the port of Odesa. The map was created on October 25, 2022, published and animated a day later, and at the time of its creation, 383 shipments from the mentioned ports of Ukraine had been accomplished.

During the escalation of the conflict, some news about the possible use of this deal for certain actions, not intended for its implementation, periodically appears. They are expressed in various media publications and bloggers posts as well as in claims of politicians, including those holding the highest positions in countries participating in the conflict. Sometimes, these statements seem unfounded and unsubstantiated. 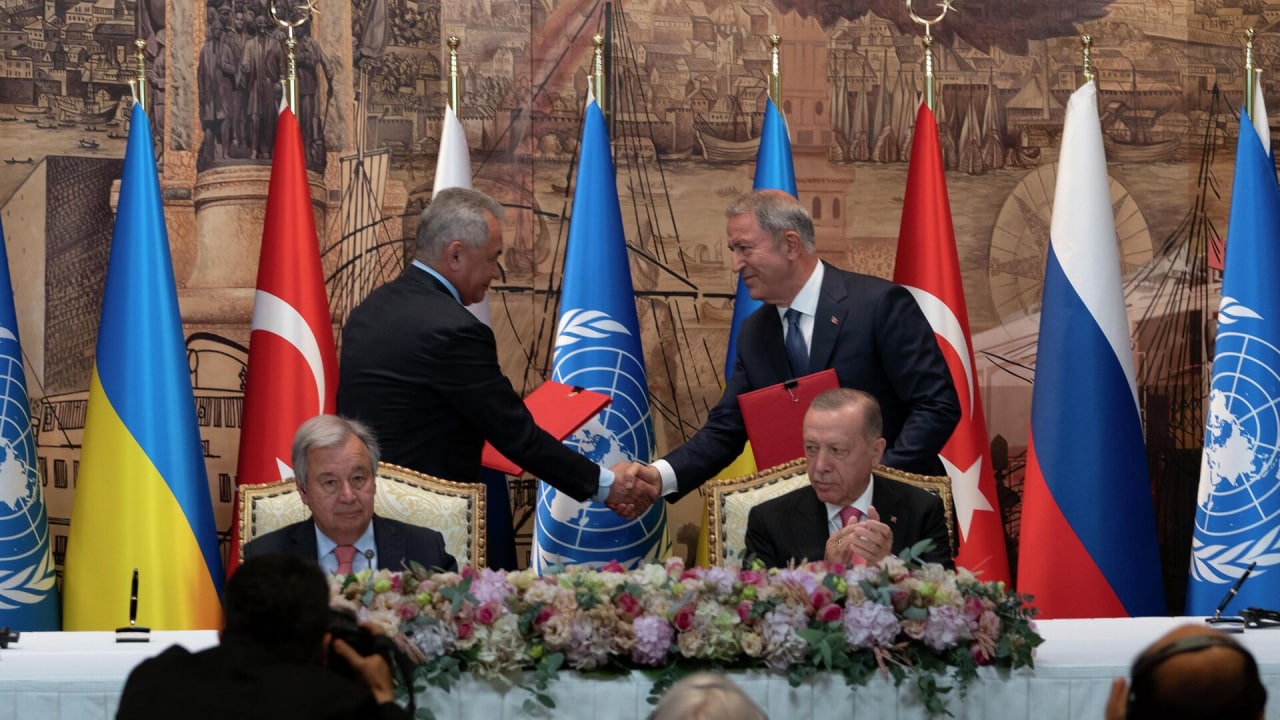 During the deal implementation, both the representatives of the parties of the conflict as the different media asked questions concerning the vessels with export cargoes. In particular, some Russian media outlets had stated that significantly less part of the whole volume of supplies was shipped to poor countries, while most of the cargo was exported to developed countries. In response to this, representatives of European organizations stated that grain prices, even in that situation, stabilized and returned to pre-war prices. The UN, in turn, within the framework of the Black Sea Grain Initiative, published a list of vessels with all directions in the public domain.

During the progress of the deal, mainly due to turning points in the course of war actions some politicians or journalists representing the parties of the conflict periodically state that their opponents make difficulties in its implementation, as well as the legality of the project is questioned, and sometimes there are even hints of its possible disruption.

The SHIPINFO / GORADAR team set itself the task of verifying the accuracy of the information stated on the Black Sea Grain Initiative website (whether the directions are correct, whether the vessels didn't deviated from their routes) using objective data, from satellites and coastal stations contrary to all statements.

Let's consider the reliability of the declared directions of some vessels and compare them with the routes on the map. 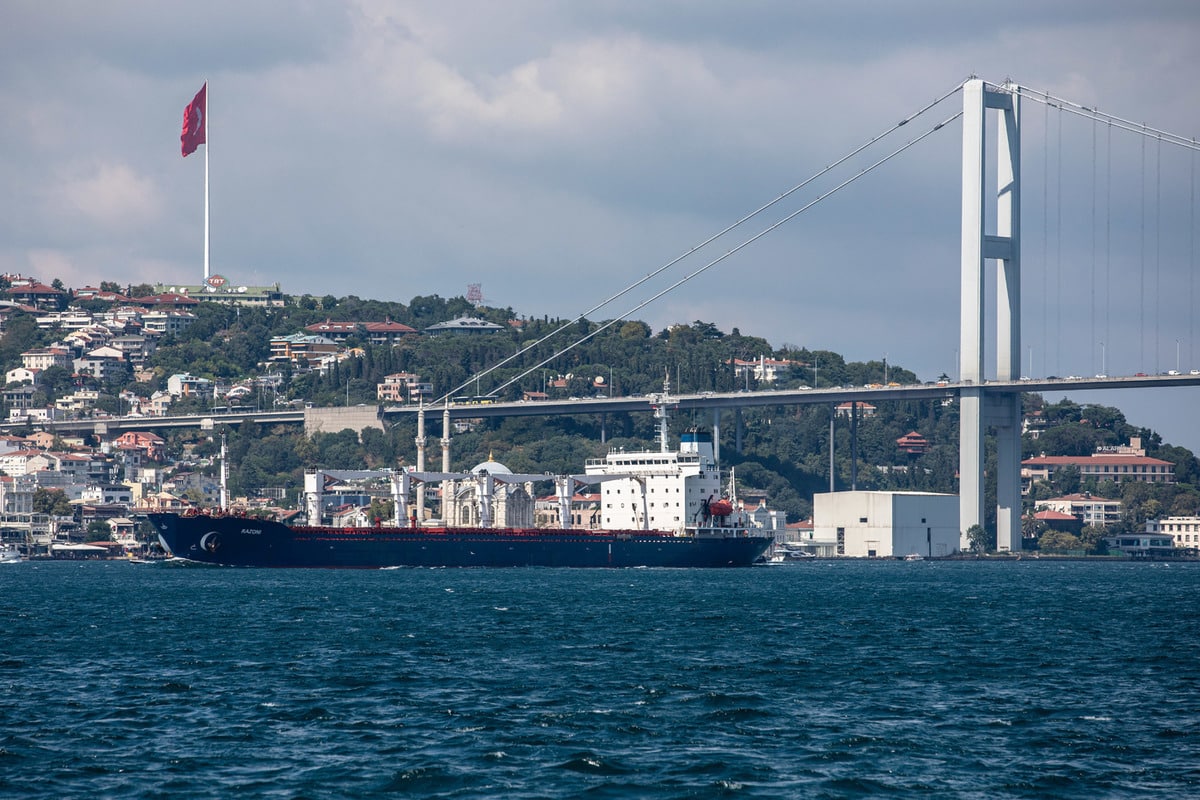 The first vessel, and also one of the most "scandalous" in the media, was the bulk carrier RAZONI under the flag of Sierra Leone (IMO 9086526, built in 1996). 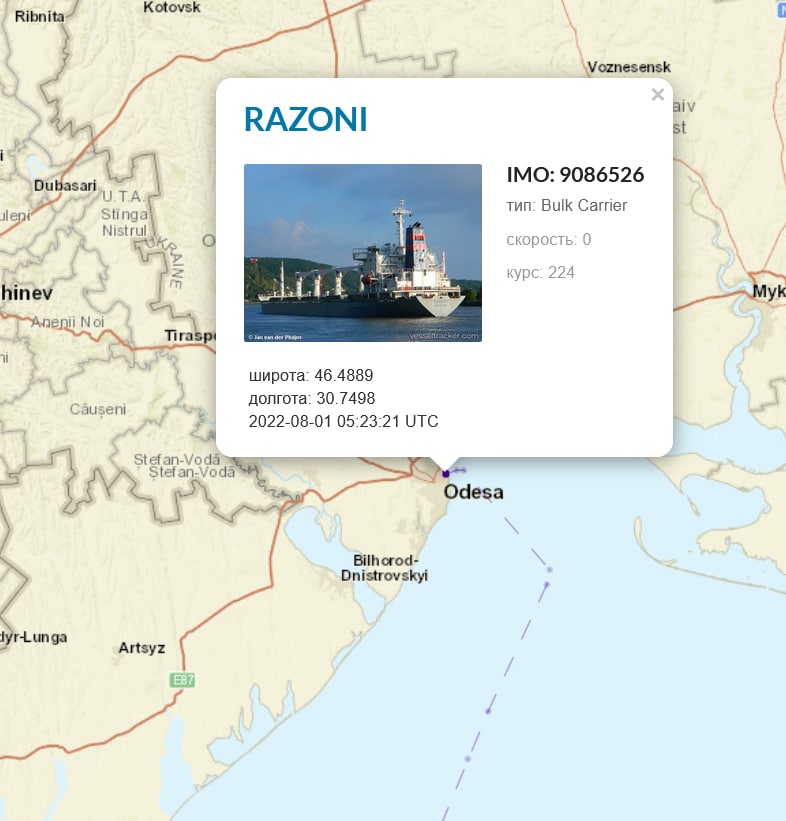 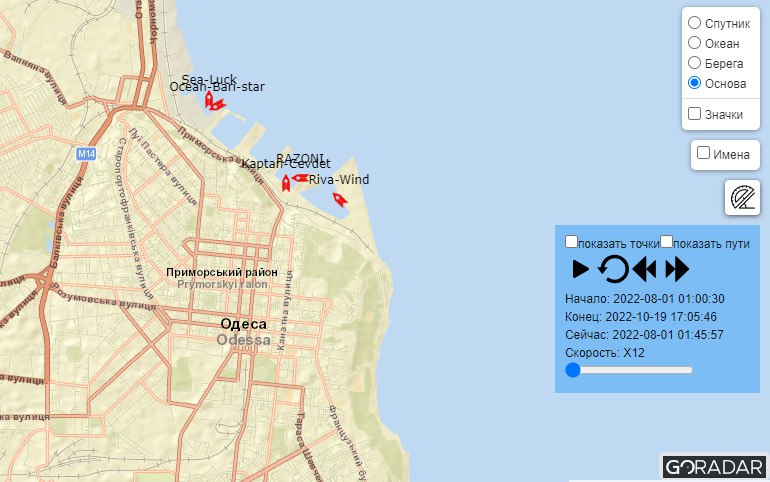 According to different media publications, the vessel left the port of Odesa on August 1, 2022. By running the animation and zooming it to the required area, selecting a time period (in fact, this is the start time of the animation), you can see that the vessel was really in the right place at the right time. 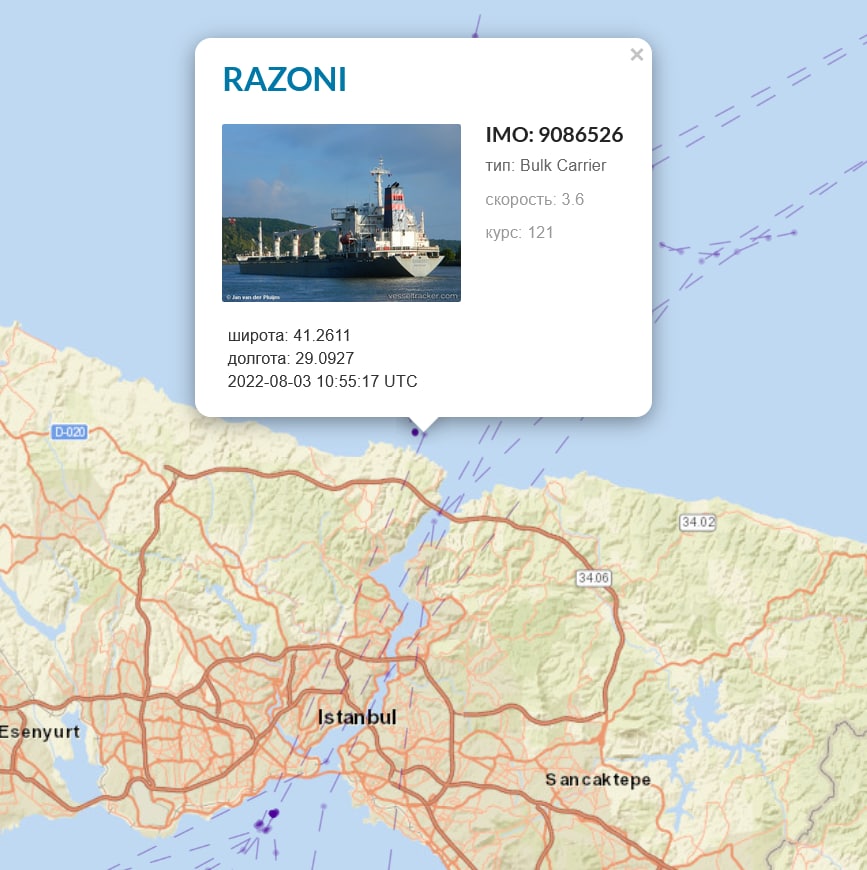 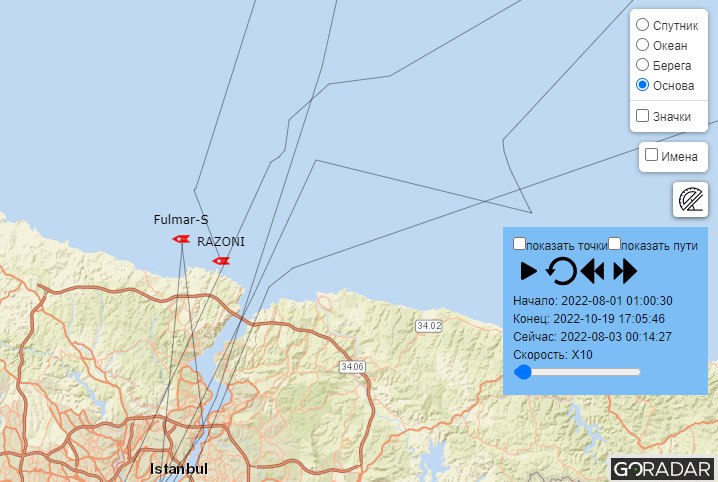 Here is a bulker approaching the Bosphorus on August 3, 2022. It's interesting that some publications then featured a message about the successful passage of control in Turkey, while the final destination was not indicated. However, the final destination of this vessel was to be the port of Tripoli in Lebanon. Here is the position of the bulk carrier on August 6th, still in Turkish waters and in no hurry to sail to the port of destination. On August 7 and 8, there was some news in the media that the vessel changed course, and that the consignee of the cargo broke a contract, allegedly due to a delay in delivery. 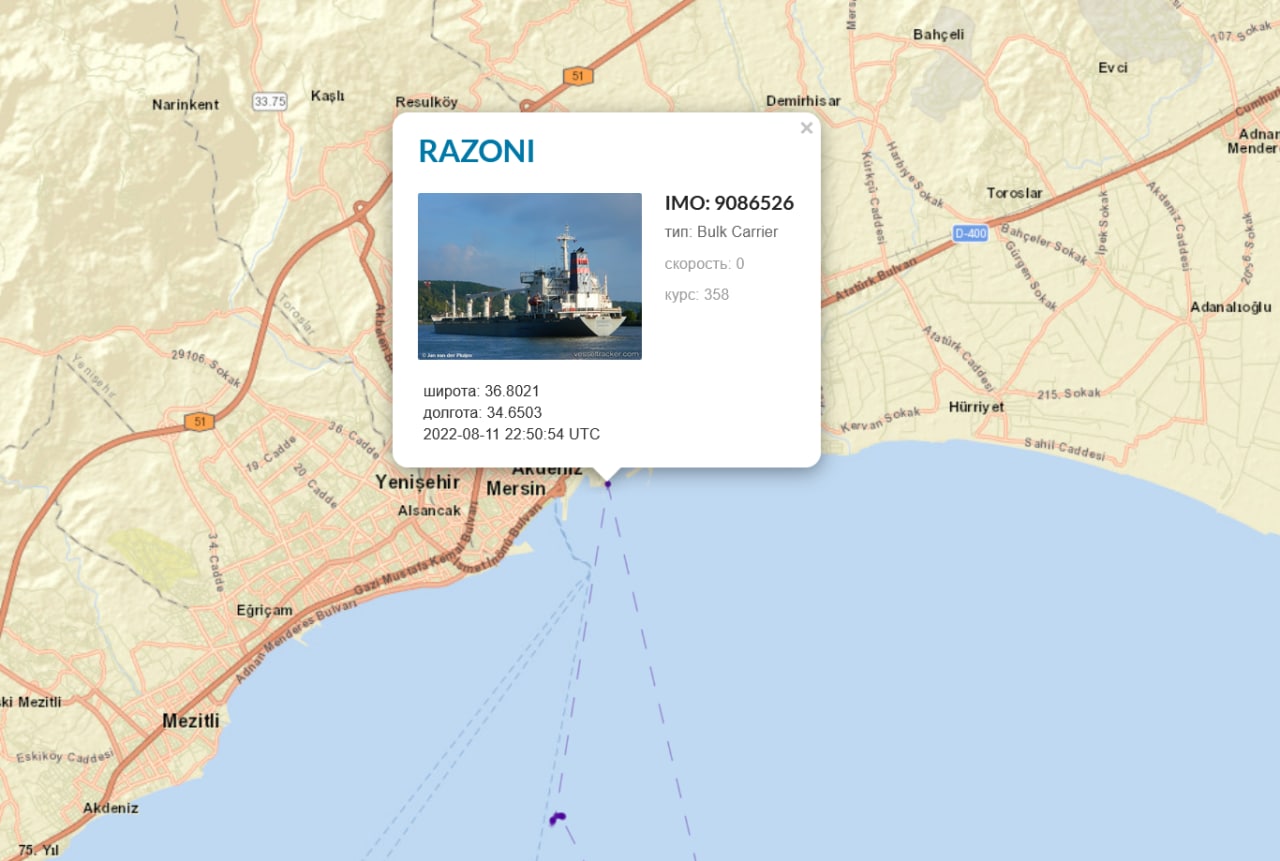 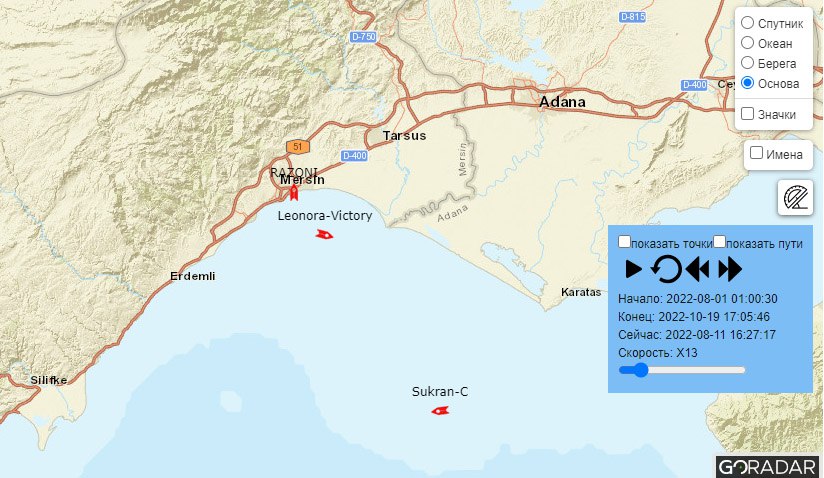 At the same time, RAZONI stayed at one point for a relatively short period, and on August 11 it already entered the port of Mersin in Turkey, and then after spending some time there, it unberthed. The further fate of this vessel in relation to this program is not very interesting, although it will still meet other vessels we will look through on its way back. 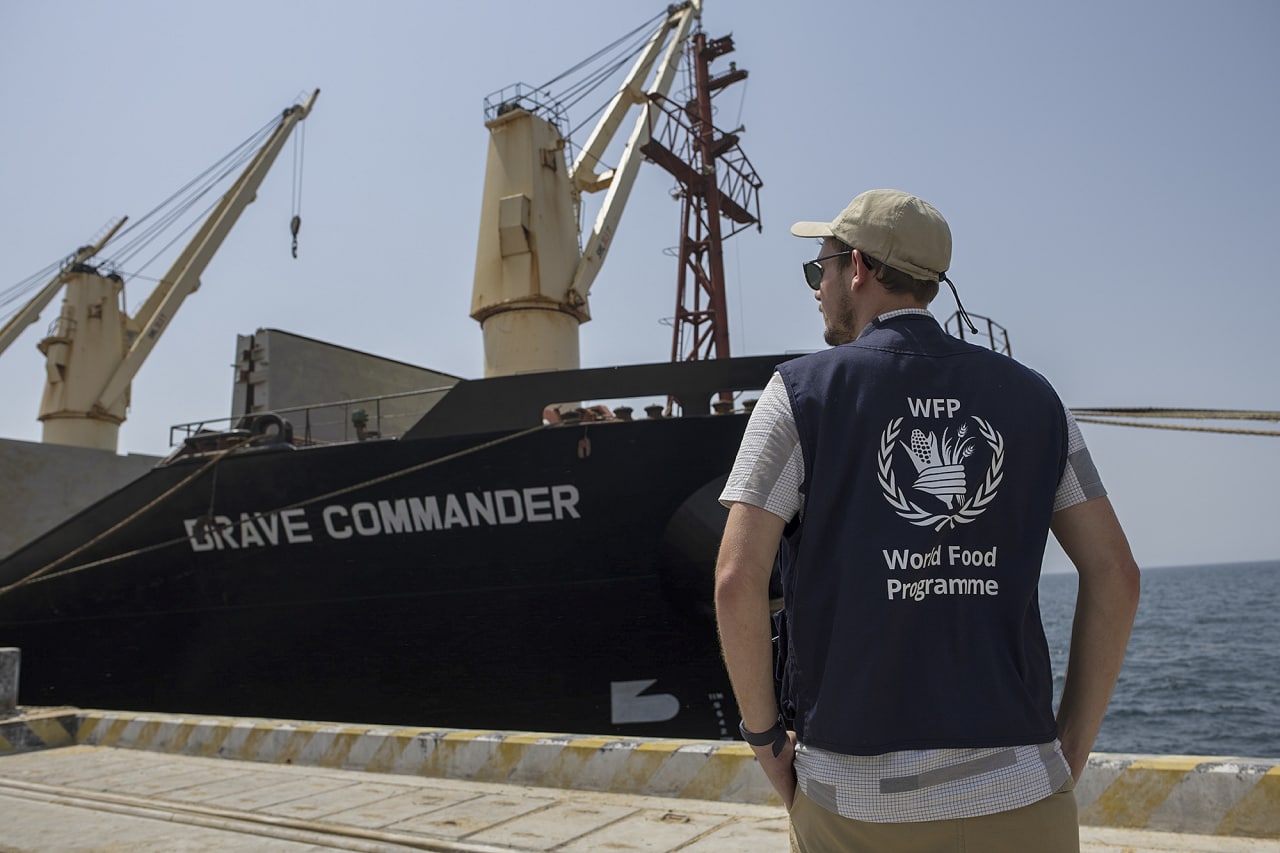 Let's analyze the route of another vessel called BRAVE COMMANDER under the flag of Lebanon (IMO 9136931, built in 1996). This vessel was carrying wheat to Ethiopia and was chartered by the World Food Program (WFP). It was the first vessel on the list which was carrying humanitarian aid, not commercial cargo. Here is a bulk carrier loaded in the port of Yuzhny on the date stated in the list, August 16th. 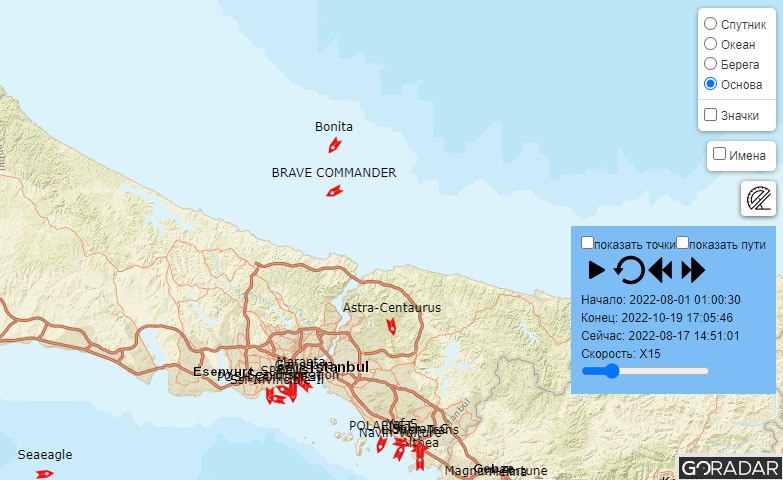 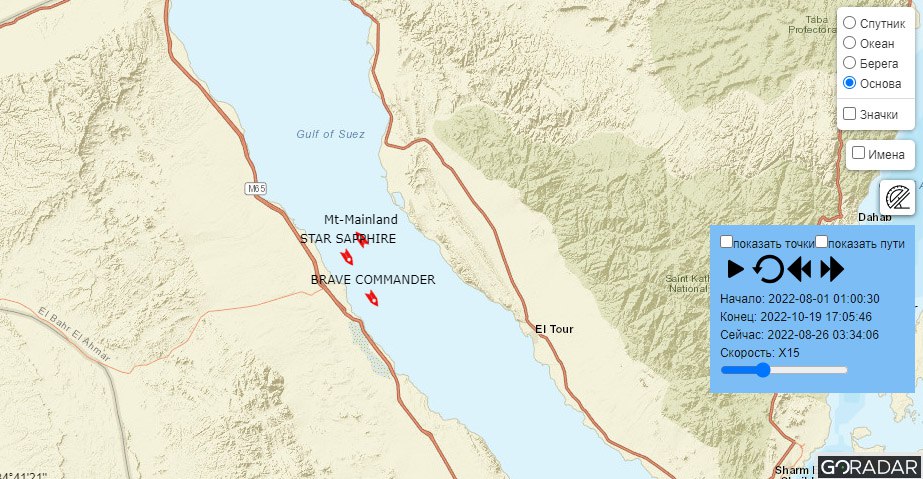 It is already August 26th, the vessel is moving in the Suez Canal towards the port of destination. On August 30, the bulker approached the port of Djibouti, from where the cargo was most likely delivered by trucks to Ethiopia. It's interesting that after unloading, the vessel left Djibouti and stood in the port roadstead for a little over a week, after which it sailed in the opposite direction. We will analyze this point in the next example. Let's analyze the route of another, the last vessel (it is far from the last in the list of the initiative, but will be the last in this analytics) called SEAEAGLE under the flag of Malta (IMO 9153056, built in 1998). This bulk carrier with wheat was sent from the port of Chernomorsk on August 26, 2022, the country of destination of this vessel was Sudan. Let's check the route of this bulker on the map. Here SEAEAGLE at the designated time, among other vessels, is in the inner harbor of the port of departure. A day later, on August 27, the vessel approached the Bosporus. Everything is relative to the schedule.

For several days, the bulk carrier stood in front of the Dardanelles in Turkey, which is a little longer than usual. And less than a day before, on the way out of the Bosporus, SEAEAGLE met a vessel, whose route was investigated by us here earlier, namely RAZONI, returning to the Black Sea.

The crossing of the mentioned above vessels is not witnessed in this article in the picture, as it happened during the exit from the Bosphorus, where the density of passing ships and vessels, even within the framework of this project, is quite significant. The figure shows an example of the location of vessels that have accumulated in this place. 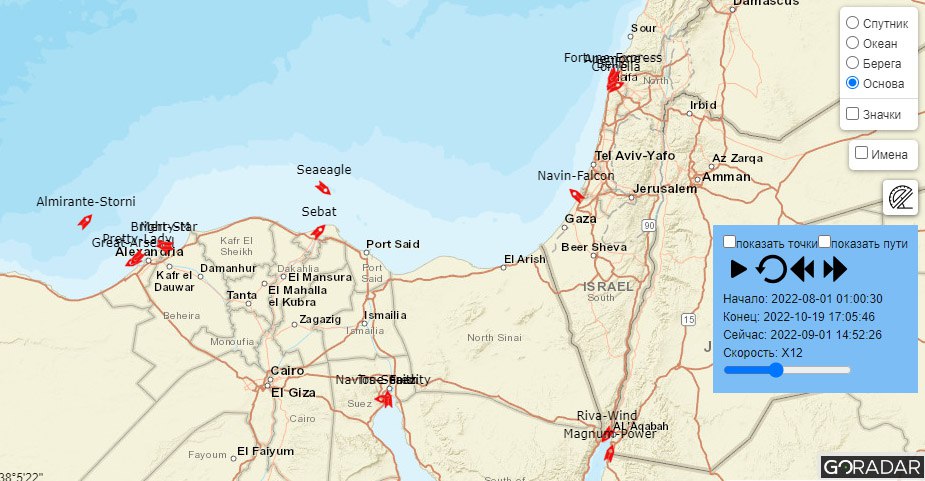 On September 1st we see SEAEAGLE approaching the Suez Canal, more or less on the standard schedule.

And here is the vessel in the port of Sudan. And here again there is a strange delay. The bulk carrier first entered the port, then again advanced to the roadstead, having stayed there for some time, then entered again, possibly for unloading. The picture shows the date September 10, while the SEAEAGLE arrived in the port area approximately 3 days earlier. In addition, you can notice what other vessel is indicated on the map. This is already familiar to us BRAVE COMMANDER. Do you remember the nuance that was mentioned in the text about this bulk carrier (a rather long stay of the vessel in the port water area after unloading) and the comment that we will come back to this? So, the last picture with the unloading of BRAVE COMMANDER is dated August 30th. In the same picture is the date September 10th. The distance between the ports of unloading of the two vessels is insignificant, about half a day's course. Thus, we can conclude that the wait for BRAVE COMMANDER was more than ten days.

The last picture shows the exit of SEAEAGLE from the port of Sudan in the opposite direction. Pay attention to the date. This is September 28th, that is, 18 days after the moment of crossing with BRAVE COMMANDER and more than 20 days after the SEAEAGLE entered the port of discharge.

Thus, on the example of several vessels, the SHIPINFO / GORADAR team checked the accuracy of the declared information on the website of the Black Sea Grain Initiative. The data turned out to be reliable.

We cannot evaluate the effectiveness of the program itself, the implementation of its goals and the logic of such a proportion of supply lines, since this will already be a subjective opinion, supported primarily by emotions, not facts.

The date of publication of this article is October 28, 2022. The map is constantly being improved, the data is corrected and brought into line, and updated with new vessels which appear in the Initiative list.

Everyone can now go to the map and trace the path of the vessel of interest to him/her using the same method as described above.