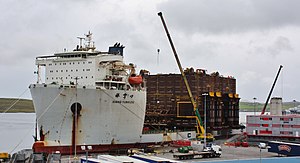 Find the position of the vessel XIANG YUN KOU on the map. The latter are known coordinates and path.

Currently sailing under the flag of China Peopless Republic

Track of the vessel in the last 14 days

The ship also appears on the maps:

Link to the map:

We will be happy to advise and answer all your questions.